‘Funny but True’ By Helen Darbellay 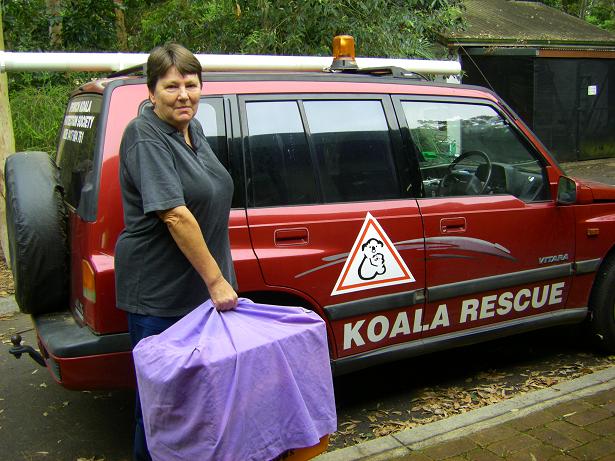 Koalas have no road sense, and don’t usually recognize a dog as an enemy until after it attacks. They just want to climb trees, eat, sleep and reproduce. Unfortunately, in the process, they manage to get themselves into all sorts of weird situations and predicaments:
...like the thirsty koala who fought a doberman for water rights. What is unusual is that this time the koala won. The dog ended up cowed and whimpering, (and very sore), huddled in his kennel, while the koala drank his fill from the dog’s bowl. (The dog’s owner rang to ask me to remove the vicious animal from her yard – I was tempted to take the dog)!
...and the young male koala determined to go to school. He tried to enter Camira State School but didn’t go through the gate like most students, didn’t climb over the fence like some naughty students, but tried going through the fence. He got his head well and truly stuck in the fence – twice in the same week! He obviously didn’t learn his lesson the first time.
...and the koala who got on a train at Rosewood station without purchasing a ticket, (probably felt he didn’t need one as he did not take up a seat). He was ‘apprehended’ and ‘forcibly removed’ from the train at Walloon station – for fare evasion. Actually, this caused a bit of a dilemma – where to return him. Where he was coming from, or where he was going to?
...and the one who ended up in the security office on the Amberley RAAF base, (this is a bit of a worry because this koala not only breached security but had our trained, fearless defense force personnel terrified - they actually locked me in with him until I had him safely in custody).
…..and the mother and baby, (small back-rider), who were sitting in the middle of the road ‘for ages’ but had disappeared by the time the rescuer got there. Finally located mum up a very tall tree, without her baby. Definitely not on her back, cuddled close to her belly or safely ensconced in her pouch. Four people spent over an hour searching the underbrush by torchlight, at 2 o’clock in the morning, for the ‘dropped’ baby – and all that time mum, (with baby safely attached), was sitting in a very small tree just above our heads, close enough to touch, watching the search. It turned out to be a classic case of mistaken identity. The koala we first located was a male, (which explains why there was no baby on his back or in his pouch). Mum, bub and the imposter were all doing well………but for how long? Their habitat on the other side of the road had been bulldozed just the day before.
Now that you’ve had your laugh…………let’s get serious! Every koala rescuer has similar stories, or variations of them – the ‘if it wasn’t so sad it would be funny’ type stories. We’ve all witnessed the confusion experienced by our simple-minded koalas when ‘civilization’ is imposed on them; when ‘progress’ reaches their small part of the world; when their small world disappears, almost literally, overnight. 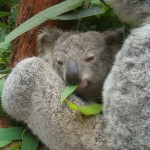 "G’day!" This is the way that people often greet each other in Australia, and it particularly suits the state of Queensland, known as the Sunshine State, because on most days it is bathed in sunlight. In the cities of Brisbane ...

On the Occasion of COP10 AJWCEF Executive Director and CEO Dr. Tetsuo Mizuno Australia is a continent rich in biodiversity. Some 70% of Australian wildlife is native to the continent. Since European colonisation around 200 years ago, however, nearly 60 ... 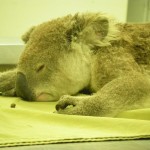 The Home They Keep Coming Back To A considerable number of koalas find themselves back at the Moggill Koala Hospital, and one of those is Lunar. All koalas who are brought to the hospital are implanted with a microchip before ...

In addition to our AJWCEF original t-shirts, you can now also purchase our original stickers by visiting the “Suzuri” website. Due to popular demand, our unique stickers with the AJWCEF original logo, previously only available for purchase in person in ...

As a not-for-profit organization, AJWCEF does not spend funds on advertising and promotions, but focuses on supporting wildlife protection groups and conducting training courses and study tours as economically as possible so more people can deepen their understanding about wildlife ...

Until now our original AJWCEF t-shirts have been available for purchase only by participants in our training courses and study tours here in Queensland, but we’re starting up online sales so people who missed out or people who are ... 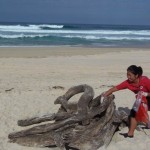 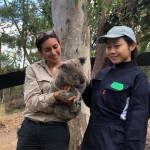